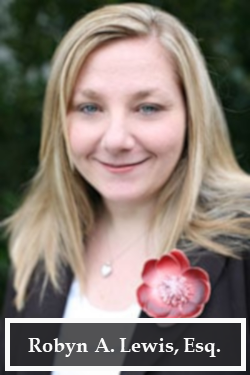 Robyn A. Lewis is a partner of the law firm of J. LEWIS & ASSOCIATES. Since Ms. Lewis’ admission to the bar in 1998, her practice has focused primarily on personal injury and elder law. She has successfully handled hundreds of cases in the fields of personal injury, wrongful death, product liability, premises liability, and accident related cases.

Ms. Lewis served as President of the Riverside County Bar Association in 2011-2012, having previously served as its President-Elect, Vice President, Chief Financial Officer, Secretary and Director-at-Large. She is a Past President of Barristers, having served her term for that organization during 2005-2006.

Ms. Lewis is the program director for “Bridging the Gap,” a program designed to assist new bar admittees. She is currently the Chair of the steering committee for the New Attorney Academy, which is an educational training program for the young attorneys, presented by the Riverside County Bar Association and the Riverside Superior Court.

Ms. Lewis served as President of the Leo A. Deegan Inn of Court in 2012-2013, a prestigious organization that is comprised of attorneys and judges. She was the first recipient of the Louise Biddle Award in 2006, which is given to an Inn of Court member for his or her professionalism and dedication to the legal community. Ms. Lewis is a former Mock Trial coach for Santiago High School in Corona, California.

A graduate of Seton Hall University School of Law, Ms. Lewis is originally from the state of New Jersey. She is married to Jonathan Lewis and has three sons and one daughter.